KENT — Dolph Traymon was still at the piano in October, never one to miss a chance at playing Chopin for the devotees of his Fife n’ Drum restaurant. Traymon died Saturday. He was 97. 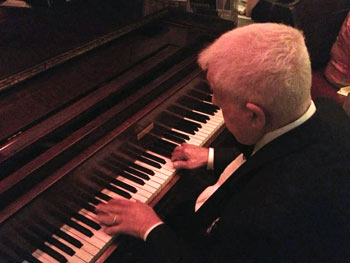 Before Traymon opened the Fife n’ Drum and became a “larger than life” figure in town, he was born Adolph Tramontana in Manhattan. And although known locally for his restaurant and musical talent, the Fife was something of a third act for the man who was friends with Frank Sinatra, shared stages with Milton Berle, and toured with Peggy Lee.

After a career in music, Traymon decided he’d carve out his own little place in show business and put it in Kent, said his daughter Elissa Potts. “He decided at the age of 50 or so” that he would put a piano bar and restaurant on North Main Street in the one-stoplight New England town. And most every night since, he played the Steinway for hours on end, with only a break for dinner, she said.

“His favorites? Classical, Cole Porter, Irving Berlin and show tunes,” Potts added. “And if he knew your favorite song, he’d play it when you walked in.” His playbook was so deep that he was deemed the “man of 10,000 songs” by the New York Times in 2002.

Born in 1919 to Italian-American immigrants, Dolph went on to play countless resorts in the Catskills during the Depression, went on to lead an orchestra that provided music for U.S. Armed Forces radio broadcasts during World War II and recorded music for ABC radio in New York City after the war, said his wife, Audrey Traymon.

Putting his Juilliard School of Music degree to work, he also played piano bars and became a partner at one in Long Island where he settled with his family before moving to Kent. On a trip to Kent on business — Audrey sold greeting cards in town — the Traymons fell in love with the area, Potts said. They saw the building that would become the Fife n’ Drum, and promptly bought it.

Back then, Kent residents doubted the two would make it, Potts said, recounting the 1973 reaction: “You open up this restaurant, your father is in a tuxedo at the piano, and your mother is in an evening gown at the door,” she said.
“And it wasn’t easy,” Potts said.

It was a family business; Potts, her mother and her husband, George, would make several weekly trips to New York to pick up provisions needed to make meals, while Traymon kept the music going, she said.

For the past 40 years, George and Elissa Potts have worked the Fife. And Elissa manned the business side of the operation so Traymon could just play the piano the last two decades. Traymon would play “four, five hours at a clip,” until a recent debilitating fall, Elissa Potts said. Up until October, he’d still be at the piano daily for 30 minutes or so, she said.

Traymon is survived by his wife Audrey; his daughters, Elissa Potts and Tracey Whitehead; three grandchildren; and four great-grandchildren. And the Fife n’ Drum, of course. Potts said she isn’t sure who will man the piano every day, but she knows there will still be music. “We’re gonna have to play it by ear,” she said. “The Steinway is still there.”

FROM THE TOP
The Dolph Traymon Story

This is Dolph’s own story about the legendary bands, singers, and personalities that have been part of his unique career and life.

A selection of popular favorites performed on his 1926 Steinway piano.

Timeless classics with the Traymon touch. If you’ve been to the Fife and heard Dolph play, this recreates that memory.

1. THE NEARNESS OF YOU – Hoagy Carmichael
2. SOMEWHERE OVER THE RAINBOW- Harold Arlen
3. FOOLS RUSH IN – Rube Bloom
4. LAURA – David Raskin
5. WHEN YOU WISH UPON A STAR – Leigh Harline
6. EMBRACEABLE YOU – George Gershwin
7. ALL THE THINGS YOU ARE- Jerome Kern
8. OUR LOVE IS HEAR TO STAY – George Gershwin
9. NIGHT & DAY – Cole Porter
10. YOU ARE TOO BEAUTIFUL – Richard Rogers
11. BODY & SOUL – John Green
11. FROM THIS MOMENT ON – Cole Porter
12. TIME AFTER TIME – Julie Styne

A selection of popular favorites performed on his 1926 Steinway piano. Recorded at the Fife’n Drum by Mel Paskell.

Return to top of page